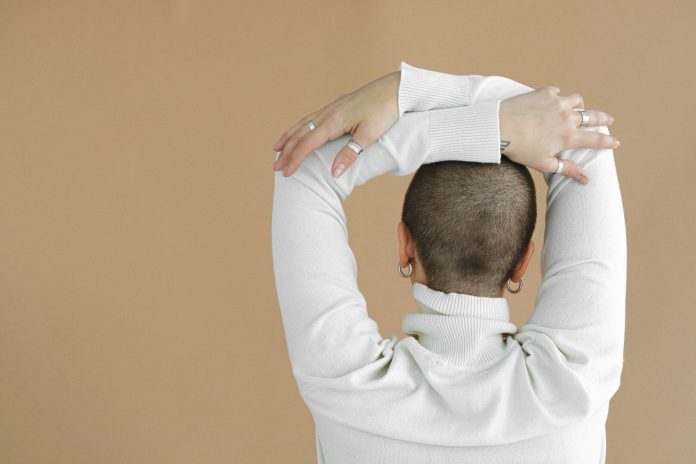 On the precipice of COVID-19 lockdown, I’m sitting in front of the mirror at an unfamiliar hairdresser, waiting to have my head shaved. The middle-aged woman who gleefully ushered me to a chair when I walked in now perches nervously on a stool before me, eyeing my shoulder-length hair with a knowing concern.

“Now, promise your mum won’t come in here tomorrow and threaten to kill me sweetheart?”

I’d been dreaming about cutting my hair short for years. Late at night I’d get this all-encompassing itch to take a pair of scissors and chop off haphazard lengths of hair. And last March, COVID-19’s promise of uninterrupted isolation to the outside world had made the urge to shave it all off irresistible.

Before then, I’d harboured no shortage of excuses. Getting that look as I walked the aisle in the bus or passed strangers on Northern Beaches streets. The feigned excitement and “Oh, wow, what a statement!” of adults at dinner parties. Fearing what consequences would come with outing myself as a ‘different’ kind of woman.

In the mirror behind me there’s an older woman, foils in her hair, enfolded in her chair, gazing over at me quietly. We listen to the silence of the salon, its usual looped radio pop oddly absent, as the hairdresser’s bouncy voice echoes into the abandoned shopping centre. She shows me her rainbow colour-coded shaver guards, referencing her half-shaven, pink and grey hair as a grown out ‘number 6’, the length we decide on for me. Running the shaver nonchalantly over my skull, she asks why I decided to do it.

“I think I just wanted a change.”

I wonder if this is the part where I surreptitiously slip my girlfriend into conversation, as if to say, “it’s not just a trend”. 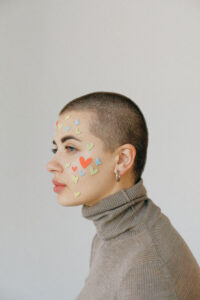 A mild suburban breeze weaves its way through the abundance of stiff centimetre-long hairs atop my head as I walk out of the shopping centre’s sliding doors. My eyes dart sideways, waiting for pedestrians and drivers to smirk as I run my hands over my head, elated. Not a soul around. I remember the very thing giving me the guts to do this is the exponentially increasing COVID-19 cases keeping people inside.

As I walk home, the streets are eery, no distant hum of traffic. I find myself hyper-aware of car doors, corners, as if waiting for someone to step out and gasp in shock at the sight of me. This feeling of being perceived – seen, evaluated, categorised – wasn’t new, but I’d never waited for it like this.

My long hair had been a calculated defence against being perceived as what iconic feminist theorist Judith Butler might call ‘unintelligible’ – a way of being woman that doesn’t quite fit into the way we usually perceive gender. Having an ‘intelligible’ way of doing gender, Butler argues, is part of how the world comes to see us as human subjects, worthy of treatment as a complex whole. I knew that ‘unintelligibility’ could have concrete impacts on my everyday life.

In my bedroom mirror, I trace the way the back of my head curves in and out, almost alien, like a newborn baby. My hairless silhouette has changed my body’s curves and grooves, shoulders more masculine, hips more prominent.

In one simple act, the way femininity exists on my body has irreversibly changed. Seeing how easily it is knocked out of balance reminds me of Butler’s proposal that we don’t each have one true, absolute gender anchored inside us. Instead, she sees gender as something we do, made up of our movements, actions, ways of being. That our body is a canvas – albeit, not a totally blank one – on which we draw the lines of gender from the moment we’re born, using the world as our stencil. And I’d just cut off the princess’ flowing curls.

Later that afternoon, my girlfriend stretches from the passenger seat to run her hand over my head, thrilled by the novelty. I post a picture to Instagram in celebration; she suggests a jokey caption to detract from the post’s dramatic quality: “in the immortal words of Taylor Swift, shave it off, shave it off.” Facing away from the camera, my body looks unfamiliar, a towering neck topped with a dome of light brown roots. I burdened myself with the discomfort of long hair for fear of this unfamiliarity – that the space I occupied in the world would shift and I wouldn’t fit in it anymore.

This delicate balancing act was perhaps forced by the way “the woman lives her body as object as well as subject”, as famously declared by American philosopher Iris Marion Young in her essay ‘Throwing Like A Girl’. I feared an escape, if limited, from the world of the feminine object. What would happen when I no longer resembled the stencil of the story-book princess? How could I know, when women like me were never written onto the page?

Regardless of my fears, hair gone, I felt a stillness, a newfound confidence. I had taken my first intentional step into my own body. I could no longer glide invisibly through the world, yet I moved aerodynamically, closer to myself than ever before. How long had I let my hair slow me down?

Sitting in the salon chair, I flicked my eyes over the shadows cast on my shaved head by the hair salon’s fluorescent lights. I caught the eye of the older woman with foils, maybe 70 years old, smiling at me. I braced myself for an awkward comment, subtle homophobia.

“It really suits you.”

Her voice was quiet, and earnest. I wondered if maybe in another universe she could’ve been sitting in this chair, 19 years old, shaving her head on a whim. More than that, I wondered if she wishes she could’ve.

Katherine Porritt-Fraser is a Bachelor of Arts student at the University of Sydney, majoring in Gender Studies and English.