The NSW police watchdog has found strip-searches conducted on four juveniles at music festivals were unlawful according to a report released yesterday. Operation Brugge and Operation Gennaker, part of a series of reports by the Law Enforcement Conduct Commission (LECC), addressed separate complaints of wrongful use of police powers.

The official complaints came from a 16-year-old girl who was left “completely humiliated” after a false drug dog indication led to a strip-search at Splendour in the Grass 2018, and three boys aged between 15-17, who were each strip-searched at Lost City festival in February 2019

One of the boys revealed an officer told him to “hold your dick and lift your balls up and show me your gooch [slang term for perineum]”. Another recounted asking an officer, “why is this happening?” after being asked to “squat and cough” while naked.

Despite finding that the strip-searches were conducted unlawfully, the Commission made no findings of ‘serious misconduct’ and it did not recommend any prosecutorial action against the officers in question.

These considerations are a far cry from the strong legislative changes many had hoped might be proposed by the LECC. The law’s ambiguous language and loopholes remain dangerous when left in the hands of police discretion according to critics of the practice.

“I think the more vague you leave the legislation, the more discretion police have, and they’ll interpret it as widely as possible,” Sam Lee, head of police accountability at Redfern Legal Centre, said. “The law isn’t adequate.”

According to NSWPF statistics, 471 minors were strip-searched in the field between 2016-2019.

Lee said the practice should be considered a form of abuse and made unlawful.

“Let’s just cut strip-searching of children out altogether, unless they have a court order to do so,” the solicitor said. “I don’t want to leave police making the ultimate decision about whether to strip search a child or not.”

The strip-searches were unlawful

The Commission investigated several police officers in their application of the Law Enforcement (Powers and Responsibilities) Act 2002 (LEPRA).

None of the four searches met the legal requirements under LEPRA s 33(A) for the presence of a parent, guardian, or independent person to represent the interests of the young person.

The legislation does allow officers to circumvent this obligation if they suspect on reasonable grounds that evidence can be concealed or destroyed. However, there was no justifiable proof of this being possible in these circumstances.

The Commission found that legal thresholds under LEPRA s 31(b) – requiring a reasonable suspicion that seriousness and urgency of the circumstances make a strip-search necessary – were not met for three of the searches. The fourth was not satisfied due to poor record-keeping.

Testimonies demonstrated an alarming disparity between the individual knowledge of each police officer of their powers dealing with strip-searching children. Of the 30 documented strip-searches conducted during Lost City festival, only five reported the presence of a support person. 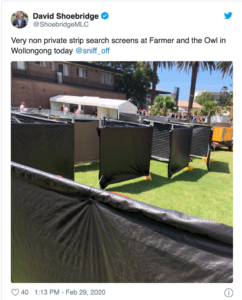 None of the three officers directly or indirectly involved in the strip-search of the 16-year-old girl was aware of the need for the presence of a parent or independent person for a juvenile. Of the eight officers who supervised or performed strip-searches at Lost City festival, only four were aware of LEPRA’s different provisions for strip-searching children.

“The legislation is dreadfully confusing and internally contradictory,” said NSW Greens MP David Shoebridge. “But it does have checks and balances in it, which those police were, seemingly, 100 per cent ignorant of.”

The responsibility for that ignorance, Shoebridge said, lies with senior police.

The Commission found insufficient guidance provided for officers at the festival in the form of briefings and operation orders, with none providing LEPRA’s detailed requirements.

“I took it that they knew,” said a senior officer who did not provide instructions on appropriate legal searching practices in a briefing before the Splendour in the Grass festival.

This is not the first time the LECC has discovered inadequate institutional guidance for NSW police officers. In a review released in January this year, the Commission found “considerable discrepancies” between the 113 Standard Operating Procedures (SOPs) around NSW for strip-searches in custody.

Of the different SOPs, willingly offered up to the police watchdog, only 7 per cent referred to police obligations when strip-searching children

“Shedding the blame home to the individual police who are undertaking the searches is a very fruitless exercise,” Shoebridge said. “The real problem lies with the failure of the Parliament to carefully codify these laws and the failure of senior police to deliver the training and the leadership needed.”

The NSW Police will not comment on specific LECC findings until the final overarching reports are released later this year. However, a NSWPF spokesperson said, “officers are instructed in how to conduct a search at the Police Academy, and this training is reinforced in a number of forums in an officer’s career”.

That statement directly contradicts the Commission’s findings: “Of the 8 officers who had any role in the strip searches conducted at the Festival, none had received any training since the Police Academy concerning strip-searching of young people.”

COPS entries from both festivals, Lost City and Splendour in the Grass, revealed missing or wrongful details required by law, such as why an independent person was not present, the basis for the search, and even the correct identity of the searching officer.

Officers explained that COPS entries were often conducted several hours after the searches. One senior constable admitted to filling out an entry related to one of the complainants during his next shift, two days after the festival, on the advice of a senior officer.

“The young person who may wish to take legal action is stymied by the inadequate reporting,” explained Michael Adams QC, Chief Commissioner presiding over the hearings.

Many expected the Commission’s reports to directly address the need for reform of common police practice asking persons being searched to squat and cough or move intimate parts of their body. While there are no explicit provisions in LEPRA, s 33(4) does not allow the search of a person’s body cavities.

In her co-authored report, ‘Rethinking Strip Searches by NSW Police’, Dr Vicki Sentas argued that asking someone to squat and cough is not lawful.

“Police are effectively trying to circumvent not being able to search cavities by getting someone to squat and cough,” said the senior lecturer of criminology and policing at UNSW.

The Commission made no recommendations on the practice of ‘squat and cough’. It instead referred to the NSWPF Person Search Manual, which was supported as consistent with LEPRA by the Solicitor-General in January 2020. It allows officers to ask a person to lift testicles, part buttock cheeks, lift breasts, and squat.

The controversial and invasive practice comes from an increase in proactive policing in NSW, according to Dr Sentas seeking to “disrupt or prevent crime before it happens”.

Whether a young person can refuse this request remains a grey area. “It’s really hard for people to assert their legal rights when they don’t have any power, and police are in a position of authority,” Dr Sentas said.

William Wykoff, principal psychologist and owner of A-Okay Psychology in Sydney said an incident like this can strip away feelings of trust and safety in authority figures such as the police.

“We choose who we get naked with quite selectively – particularly for a teenager who is starting down that path of sexual exploration or sexual identity,” Wykoff said.

“Being asked to get naked by somebody you don’t know, then to be searched for something that you may or may not have, is quite a big violation of privacy and can be considered a traumatic event where your agency has been undermined.

“For somebody who experiences a trauma, trust is often the hardest thing to gain back.”

The 16-year-old complainant said she no longer trusted police after being strip-searched while carrying no contraband. “Because I was falsely accused, I just feel that my trust in the police is affected because obviously, I feel like I can’t call the police or I might get in trouble for something I didn’t do,” she said.

Former Chief Commissioner, Michael Adams QC, who was controversially stood down shortly after the December hearings, intended for psychological evidence to consider the mental wellbeing of juveniles in the Commission’s ultimate recommendations.

But the release of yesterday’s reports indicates the Commission’s satisfaction with the NSW police’s “considerable improvements” in strip-searches conducted at Lost City festival in January 2020 due to implemented changes.

According to an LECC spokesperson, psychological evidence on strip-searches will be given later this year and presented in an overarching report.

Tim Piccione is a 25-year-old Media and Communications postgraduate student with a passion for Australian and American politics. 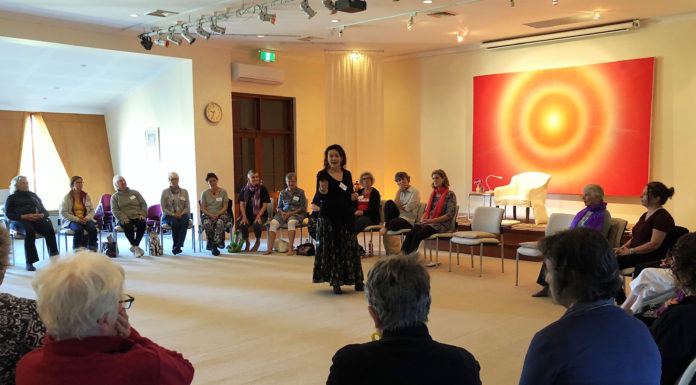 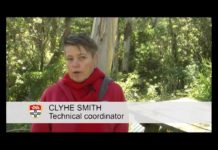 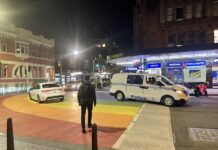 Pandemic Plea: The Reef wants you back