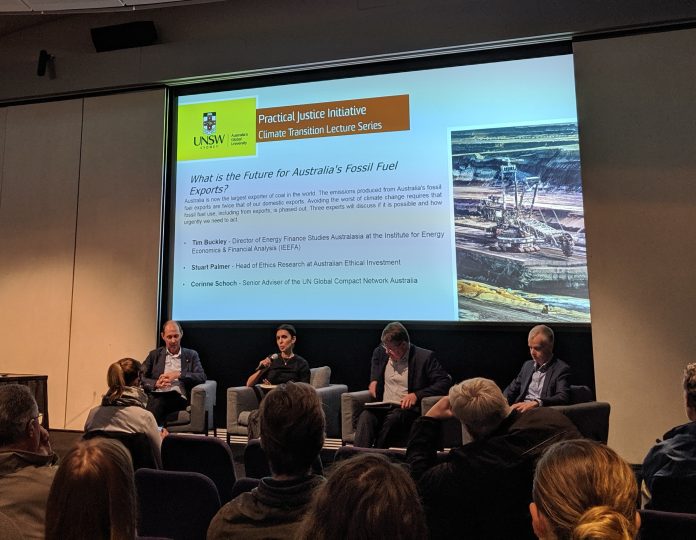 A leading energy market analyst has labelled the Australian Government “deluded”, warning global forces have pushed thermal coal into a terminal decline at a climate transition debate in Sydney on Tuesday night.

Tim Buckley, the Director of Energy Finance Studies at the Institute for Energy Economics and Financial Analysis, said financial markets would drive the global transition to clean energy.

“It is a huge financial risk to the Australian economy,” he said.

“Thermal coal for power generation is already an expensive source of energy in India where renewables are 50 per cent cheaper [than coal]. It is a delusion for the Australian Government and mining barons to rely on coal exports to India. Financial markets will accelerate the transition to renewables.”

The panel event was the first in the University of NSW Practical Justice Initiative’s Climate Transition Series. Other speakers on the panel backed Buckley’s comments. Corinne Schoch, Senior Advisor at the United Nations Global Compact Network, said the Federal Government needs to catch up with industry, which is already planning for a decarbonised future.

Schoch works with Australian businesses including miners and banks to bring about a just transition to a decarbonised economy.

“A just transition is about a conversation with a diverse set of stakeholders,” she said. “The Australian Government is not doing enough.”

The panel proposed a three-pronged approach for the Government to take control of the transition to clean energy: a price on carbon, a ban on political donations from the fossil fuel industry and proper investment in alternative industries to support a just transition.

The proposal was similar to demands made at the Global Climate Strike on Friday. Hundreds of thousands of protesters around Australia called for a ban on new fossil fuel production, 100 per cent of energy from renewables by 2030, and public investment to support a just transition for the economy away from fossil fuel production.

Dr Joe Collins from the University of Sydney’s Department of Political Economy said there are good reasons why the government is not “doing enough”.

“We have a structural dependency on export-oriented economic growth,” he said. “The Government is somewhat hamstrung in its capacity to act because of policy reforms since the mid 1970s that have effectively removed the capacity of the state to steer the economy.

“Even if [the Government] wanted to act, its capacity to do so would be pretty limited.”

Collins said significant investment in alternatives to fossil fuel production would be more effective than the incremental adjustments of financial markets. However, he warned the focus needed to be on a just transition.

“Any kind of action on climate change that’s removed from the concrete needs of people in particular regions will not have the effects we anticipate,” he said. “I don’t think it’s necessarily reasonable to expect that specific communities will bear the brunt of required social changes.”

He proposed targeted investments that would provide jobs for former fossil fuel industry workers. “One of the ways in which people can try to sway the situation is to provide alternatives, particularly in [coal producing regions],” he said.

There are plenty of alternatives, according to Collins, who cited large gaps in the recycling industry following China’s decision to ban imports of waste for recycling in 2018.

Contributor Bio
Tristan Durie is an economist and writer based in Sydney. He is studying a Master of Media Practice at the University of Sydney. Tristan can be reached by email or on Twitter, @TristanDurie.