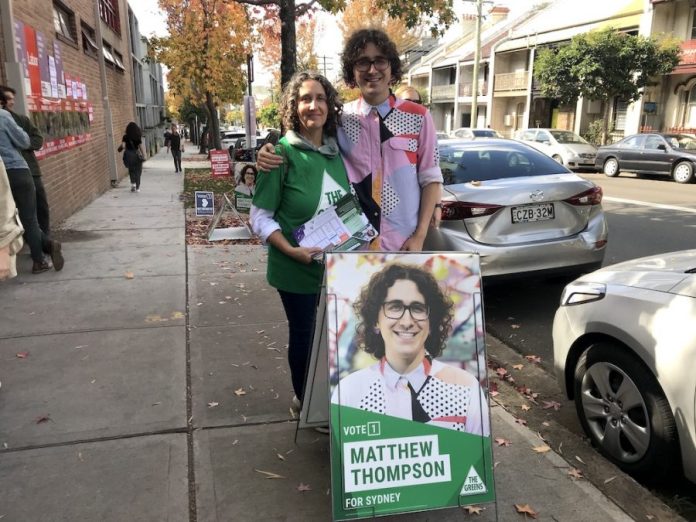 Wearing red ‘Stop Adani’ earrings and his signature multicolour and patterned dress shirt, the Greens’ Sydney candidate Matthew Thompson appeared at the Darlington Public School polling booth with a smile and a bounce in his step.

“This has been my first election. The response has been really positive, and  the people are beautiful and wonderful,” he said. “People want real action on climate change, they want a progressive government, they want to kick this conservative government and its cruel agenda out.”

In a sea of purple shirt Labor volunteers there were two Greens volunteers — and one of them was Matthew’s mum.

“I’m proud of him,” said mum Nicole Schimanski. She took a break from her holiday to support her son in the final stretch of the federal election.

Even though Green volunteers were outnumbered, many voters would only take the Greens voter sheet, some seeking the volunteers out to get hold of one.

“The people that we’ve been speaking to in this election are seeing themselves represented and reflected in a politician for the first time in a long time. I think it’s really important that we have queer representation in parliament.”

After the election is over and Sunday dawns, Matthew plans on enjoying the luxury of being able to sleep in again.