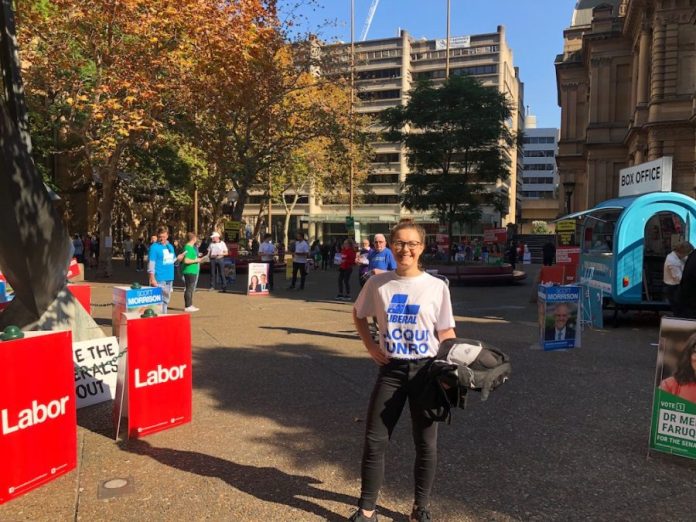 It’s a bright Saturday morning and Jacqui Munro, Liberal candidate for Sydney, has just arrived at the Sydney Town Hall polling booth to cast her vote. The sausage sizzle is already in full swing. A man in an Akubra belts out “Waltzing Matilda” as he serves sausage sandwiches to voters.

Jacqui arrives clad in a black motorcycle jacket, black jeans and sneakers, her hair scraped into a high bun. She stops by the makeshift Liberal campaign booth, comprised of cardboard boxes covered with Liberal banners, and quickly stuffs her motorcycle jacket inside one of the boxes.

“It’s so much fun to be out here,” she says. “I think people are happy to be out at Election Day or maybe it’s just me because I’m so excited.

“I’ll be spending my day riding around to polling booths on the motorbike so I can speak to as many people as possible.”

The Liberal candidate for Sydney is not concerned about the 11 per cent margin in favour of Labor, saying she’s about “offering people a choice because the Labor margin can only decrease with a strong challenge”.

She quickly films a live stream instructing how to vote for her, laughing as she asks her supporter to film a second take. As she enters the building, she chats to her former co-workers and quickly submits her ballot.

After she votes, Jacqui is already on the move, riding to Pyrmont Community Centre to continue talking with Sydney residents.