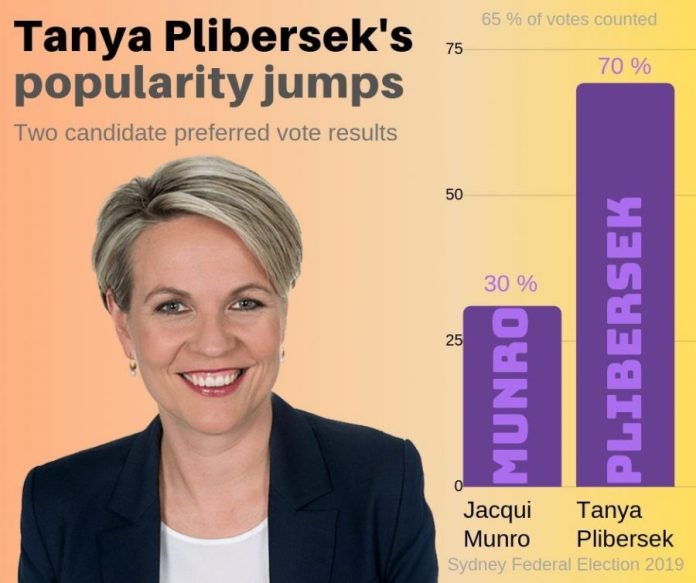 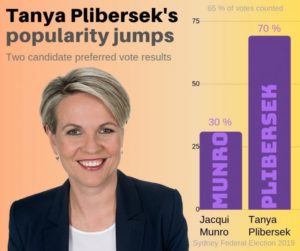 Sydney’s overwhelming vote of confidence in Tanya Plibersek and Labor contrasts sharply with how the majority of Australia voted yesterday. While Labor was losing the ‘unlosable’ election, with their predicted romp into power based on pre-election polls using phone techniques that are now being questioned as outdated, Ms Plibersek was caught in the bittersweet position of having increased her personal popularity while her party’s crashed.

Over 65 per cent of votes in the electorate have been counted this morning and the trend has consistently put new Liberal candidate Jacqui Munro far behind incumbent Ms Plibersek in the two candidate preferred vote. Almost 70 per cent of voters re-elected Ms Plibersek leaving just over 30 per cent who preferred Ms Munro. It was expected that Ms Plibersek would cruise to victory by a comfortable margin based on her previous seven re-elections in this very safe seat, but she has also enjoyed a swing to her of over 4 per cent.

In 2016 she gained ground with a swing of over 2 per cent against Liberal candidate Geoffrey Winters and yesterday his replacement fared worse, unable to chip away at Ms Plibersek’s following. While Ms Munro had been peddling her bike around Sydney, campaigning and meeting the electorate, Ms Plibersek was on planes to Labor worry points Australia-wide, flying in from Queensland the day before the election to place her vote on home ground yesterday morning. Far from hindering her prospects in Sydney, the voting results show her electorate received her campaign messages loud and clear, unlike the rest of Australia. 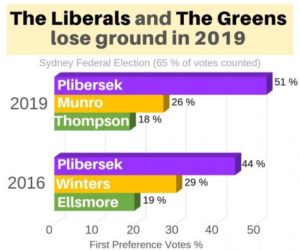 Preference votes for the major parties in Sydney were surprising in that the Greens trod water, even slightly decreasing in popularity, after an election campaign where one of the most hotly contested issues was climate change. Although, with the Adani mine issue in Queensland influencing an exodus away from Labor it is possible more immediate concerns were on people’s minds when they voted such as jobs and pay checks.

Matthew Thompson, a vocal candidate for The Greens, is currently hoping to breach 18 per cent while Ms Munro is just shy of 26 per cent. Ms Plibersek is on almost 51 per cent and because of this margin is considered one of Labor’s success stories as they lick their wounds and confront leadership issues.

Of the minor parties, Adam Holt, from the United Australia Party, and Rebecca Reddin, representing Fred Nile’s Christian Democratic Party, were barely on the playing field with each logging up about 1 per cent of votes. Adam Holt’s insignificant result might be more important when viewed collectively with those of his compatriots as the Coalition’s ability to join with disparate parties was cited as a factor in Labor’s downfall. Rising marginally above these parties was Aaron Hammond of the Science Party who nabbed over 3 per cent of votes, but the big guns unsurprisingly collected the bulk of votes. 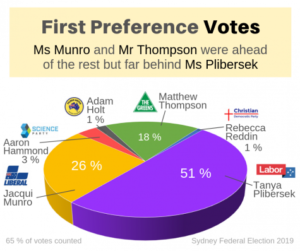 As Labor’s tide of confidence at the start of counting gradually ebbed away the party’s future needed to be addressed. Deafening cheers from the Labor faithful filled Ms Plibersek’s election party hall at the Erskineville Alexandria Bowling Club when Liberal Tony Abbott fell to independent Zali Steggal early in Warringah but the mood changed as counting revealed it was impossible for Labor to claim victory, a situation not helped by Queensland’s devastating backlash. As midnight neared, Ms Plibersek acknowledged election defeat had forced Labor’s leader Bill Shorten to resign, writing on Twitter: “Thank you Bill. You could not have worked harder or done more”.

Labor leadership is now up for grabs and Anthony Albanese, who previously vied for leadership when Mr Shorten won the role, announced this morning he will run. The other most likely contender is Ms Plibersek, who polls such as those on Twitter’s popular #ausvotes and #auspol hashtags ranked overnight as a favourite behind Mr Albanese. Other voter insight research, including Morgan Polls, have her top of their list to run the Labor Party. Although yesterday’s election holds among its many lessons a cautionary approach to polls, the names Plibersek and Albanese have frequently been thrown in the hat as future leaders over the years.

“I think we had a very big and bold plan for government and I’m confident that if people had more time to look at some of our plans, like our pensioner dental scheme and our cancer care package, we would have won them over.”

Always a proponent of unity within the Labor Party and respected for the support she gives other party members, including Bill Shorten as his deputy, Ms Plibersek is now facing a leadership question in Labor that needs to be answered. When asked on the ABC’s Insiders this morning if she will run for Labor Leader she said: “I’m certainly considering it”.

After an election where the policies the population was voting on were widely disparate between parties, resulting in a shock loss suffered by seemingly favoured Labor, Ms Plibersek has her work cut out for her to change the population’s perceptions. A staggering 70 per cent of the Sydney electorate has just voted her to be their leader and we will soon see if members of the Labor Party share this view.