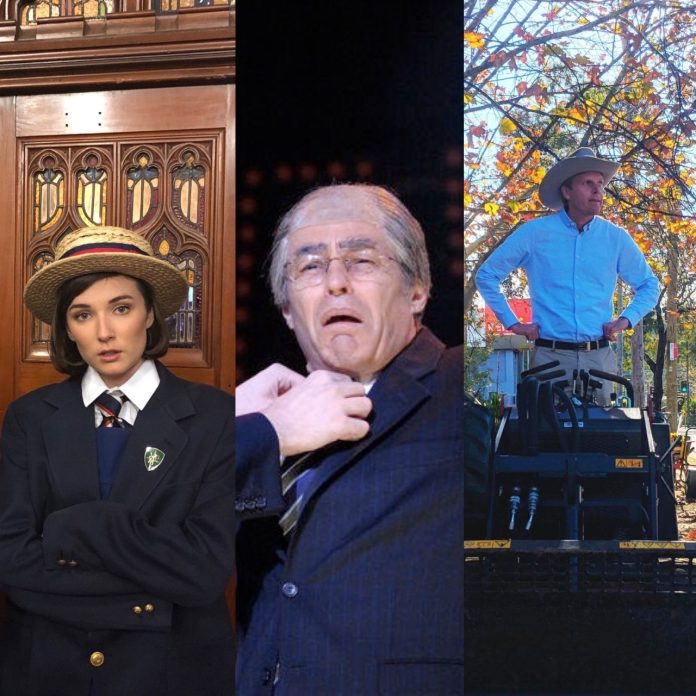 When Australians tire of commentators arguing on panels and politicians avoiding questions, they often turn to those who make light of the absurdity that is politics. So, what do those comedians say with their own voice when not in character?

Before the fast-approaching federal election, three past and current Australian political satirists and actors spoke about their place within the genre of political comedy and gave their views on some of the significant issues Sydney voters will face when they head to the polls on May 18.

Actor Terry Serio played the iconic satirical characters of former prime ministers John Howard and Bob Hawke in the acclaimed Australian musical, Keating!. The Helpmann Award winner recalls the importance of the show as it played across the country between 2005-2008.

For him, it was much more than a show poking fun at politicians.

“The musical brought many people together who thought they were alone in thinking the government was out of control,” he says. “They could see that if they all stood up, they could actually change the government. It was a palpable thing.”

Asked which of his characters was the most fun to play, Serio couldn’t help but slip into the voice of John Howard. “Oh, definitely Howard.”

Unlike working satirists, Serio did not tone down his political allegiances during the run of the show to appear apolitical.

“Not in the least! I believe there was great freedom in that,” he says.

Nor does the actor mince his words about his disapproval of Howard and of the current serving Liberal politicians.

“The poignancy that I could find in the delivery for Howard reflected my disappointment in his ethics and humanity,” he explains.

In this election home ownership and housing affordability have become central issues. Serio, 63, has experienced the changes in home ownership and the evolution of development around the inner-city since moving to Sydney from Western Australia in the 1980s.

“I remember at one stage Sydney was one of the greatest tourist destinations in the world because it was such a fun place to be. But I don’t think that’s the case now,” he says.

The gentrification and development of Sydney continues to divide residents with suburbs like Ultimo, Kings Cross, Millers Point, and Redfern rapidly changing.

Serio says developers have always followed artists around. When an area is filled with music, art and excitement, for example areas like Kings Cross and Darlinghurst, people want to be a part of it.

“I feel lucky to have lived in those areas at the right time.”

The culturally-rich and diverse suburb of Newtown, where Serio lived for several years in the early 2010s, may be the next to undergo the transition to gentrification.

“I have no doubt,” Serio says. “There are certain signs you can see it’s shifting; as vintage shops make way for real estate agents you know things are changing.”

But not all comedians feel the urge to express their political views unhindered.

Mark Humphries, formerly of SBS’s The Feed and now doing sketches for ABC’s 7.30, admits to having “openly despised” politics and people who were into politics during his high school and university days.

He saw it as something his parents argued about at the dinner table.

“I ran in the opposite direction,” he says. “Even though I had no intention of being a political satirist – I always wanted to write sitcoms – you suddenly find yourself filling the Clarke and Dawes slot on 7.30. It could happen to you, kids!” He laughs.

Humphries says he remains genuinely apolitical and hesitates to comment on politics: “I’m not a commentator.”

But any election creates professional excitement.

“It’s Christmas for political satirists,” he says. “Every day someone is putting their foot in it during an election campaign so I’m looking forward to seeing who does it this year.”

There are significant issues facing voters this election: like many younger Australians living around the city, Humphries, 33, has accepted he may never own a house in Sydney. He says he and many of his friends have resigned themselves to never owning anything, crushing common childhood ideals.

But other issues are of more concern; with school students striking and continued fighting over the Paris Agreement, Adani and electric cars, the debate over how to effectively and economically tackle climate change still raging in Australia is a worry.

“I think that having children has ramped this up in my own head,” says Humphries, a father of two. “That’s been such a frustration to me, witnessing the stalemate on climate action for over a decade now. It’s the fate of the planet; it’s life itself.”

Humphries is prepared for the possibility he and the next generation of Australians may have to live through a “Mad Max scenario”.

“I’m very interested in doing some sort of wilderness survival,” he says, laughing.

On a more serious note, he worries about the impact of Australian politicians who deny the effects of climate change.

Jenna Owen, 23, chief satirical correspondent for SBS’s The Feed and co-founder of Freudian Nip, is also somewhat uncomfortable discussing politics. She admits that before working on The Feed, she engaged with politics superficially.

“I wouldn’t consider myself particularly knowledgeable in the ins and outs of politics in the way that political commentators are,” she says.

Instead, she provides an accessible lens through which people can understand complicated and alienating topics.

“My favourite work that we do is when we take an issue that might be a bit complicated or dry and put it in a form that allows people to engage with it,” she says. “The point of satirical comedy is not to speak to a bunch of people who understand how politics work.

“The point of political satire to me is radicalising people into change.”

Owen, 23 has also accepted she may never own a house in Sydney.

“Unless some big comedy money comes in,” she says laughing. “No, I don’t see myself purchasing a house. I’ve kind of made peace with that.”

For this reason, she and The Feed satirised Scott Morrison in a sketch depicting a leaked apology from the Prime Minister after his comments about the gender pay gap last International Women’s Day made news around the world.

Serio may be right to say that all is forgiven in satire. During his time on Keating!, he experienced a rare freedom of personal politics.

For the vital freedom to say what they want professionally and to reach a wide audience, satirists like Humphries and Owen avoid bias and speak on political issues with care. But there are, it seems, issues that transcend politics. They may not be “commentators”, but their voices carry weight.

In the meantime, all satirists will continue the important role of tickling our funny bones and seeing us sane during our frequent and everlasting election campaigns.