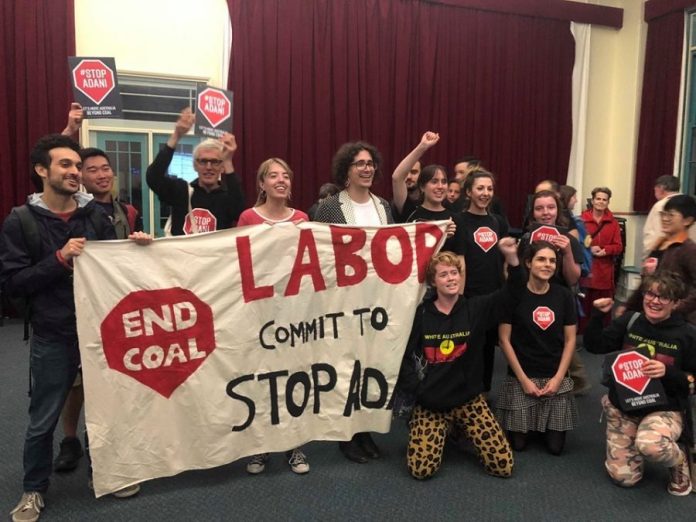 Climate Change revealed itself as the most critical issue for the 40 residents who attended the Sydney electorate candidate forum at the Alexandria Town Hall last month. The forum was dominated by young university students holding anti-Adani flags and demanding reassurance that plans for the mine would cease. The candidates who attended were Aaron Hammond for the Science Party, Tanya Plibersek for the ALP and Matthew Thompson for the Greens.

Thompson, donning ‘anti-Adani’ earrings, was outspoken in his objections to plans for the Adani mine. He said that as a recent graduate he has empathy for the students who are protesting, saying he too was “scared of what the future holds for [his] generation”. He said the Greens will always be the party of the environment. “All coal has to stay in the ground,” he said.

Science Party candidate Aaron Hammond agreed and said it was important for Australia to turn towards more sustainable energy sources.

Asked about her stance on the Adani coal mine, Labor deputy leader and sitting Sydney MP Tanya Plibersek said: “Adani has to stack up environmentally and economically, I am sceptical that it will.”

Ms Plibersek said her focus for this particular issue was to produce a new legal framework to improve Australia’s environmental laws. Pushed to take a stance, she said: “I’m not going to stand up and promise the end of Adani because that would be dishonest.” Ms Plibersek instead condemned a potential Royal Commission into the Murray Darling arguing that “the problem is not that we don’t know what to do but that we aren’t doing it”.

She said the ALP was committed to investing towards a green Australia and promised that under an ALP government, the LNP’s emissions funding scheme would be scrapped and replaced with a $10 million budget for renewable energy, reducing land clearing and an increase of electric vehicles to lower pollution levels.

Plibersek, also the shadow minister for education, promised that Labor would not only match current funding for private and religious schools but pledged an extra $14 billion for public schooling over the next decade. She said two thirds of Sydney’s education is public so a larger budget is needed to increase the quality of facilities and teaching to ensure equal opportunities in Sydney’s schooling system.

The electorate of Sydney has a large young demographic and youth issues such as housing and education were also major topics of discussion at the forum. Ms Plibersek spoke about the ALP policy to end negative gearing except for new buildings saying it would allow younger residents to buy their first home instead of competing with investors buying their seventh property. Home ownership is a key issue in this electorate with the latest census revealing that 60 per cent of residents are renting.

Thompson agreed saying housing is an Australian right and changes need to be made to allow younger Australians to become home owners. He also addressed the topic of crisis housing, a prevalent issue considering the recent proposals by the Government to demolish 70 per cent of crisis housing in Waterloo. He said an estimated 200 people were turned away every night from crisis housing in Sydney and that the Greens party was “committed to ensuring everyone has a bed at night”.

Contributor biography
Eve Lollback is a current postgraduate student at the University of Sydney who has a love for writing, reading and wine.