The opening sequence of Björk’s ambitious album companion app Biophilia lays the framework for her vision and artistic direction of the record’s multi-sensory experience. As the voice of David Attenborough guides the user through a digitally rendered three-dimensional constellation, the app’s thematic amalgamation of nature, music and technology is established, interwoven with the sounds of the song “Cosmology”.

Björk has always been known for her experimental music and avant-garde works, constantly pushing the boundaries of art and sound to craft a genre of her own. It therefore does not come as a surprise her seventh studio album Biophilia arrived with a suite of interactive multimedia apps taking the user through a visual, aural and physical exploration of the universe and natural phenomena through the lens of each of the 10 songs on the record. In a world where digital music and streaming technologies have turned music consumption into a passive experience, the Biophilia apps have transformed the way audiences experience music, innovating a participatory and interactive approach to the traditionally aural medium.

Nothing about the release of Biophilia is traditional, thus its categorisation as an “album app”, a multimedia experience that augments the musical features of the record still continues to be a format yet to reach the mainstream. Many, such as HuffPost’s Mallika Rao and Gazelle Emami have considered Björk to be the first to create an app complementing an album.

Professor Nicola Dibben from the University of Sheffield argues that Björk may have been influenced by French band Nouvelle Vague who released an app for their 2009 album, although for more promotional purposes of sharing news and exclusive content. In this context, Björk was truly the first to innovate the musical album into a format inviting users to immerse themselves into the universe of the music, and even participate in its process rather than let the audio play.

In an interview with David Robson for New Scientist, Björk discusses how the core theme of Biophilia focuses on the relationship between science, nature, music and technology, inspired by the book Musicophilia by neurologist Oliver Sacks. These concepts are visualised through digital imaginations of natural forces and processes that reflect the scientific subject matter of each song.

The app for the song “Virus” involves microscopic views of viruses attacking cells, illustrating the process of cellular reproduction which the user can prevent (ceasing the music) or enable (triggering further infection). The user engages with this app through a multi-sensory experience, interacting with the cells as instruments by flinging nuclei into cells to play different sounds or samples from the song. Similarly, the app for the song “Hollow” is a simulation of the molecular world and enzymes, allowing the user to create a DNA sequence that triggers the percussive pattern of the song. These visualisations in “Hollow” are created through digital representations of what Robson describes as molecular modelling and X-ray crystallography experiments that are animated in a scrolling form to imitate an interactive musical score. The most striking of the songs is “Solstice”, which Dibben suggests uses the visual metaphor of the solar system and planetary orbits to visualise a circular harp with which the user can interact to create melodic sequences, similar to the motifs of the song itself.

“Solstice” along with “Moon”, a visualisation of the phases of the moon as a music sequencer, are an unequivocal representation of Canadian composer Raymond Murray Schafer’s concept of the “music of the spheres”, which he describes as music that “arises with the discovery of sonic properties of the universe” in his work The Soundscape: Our Sonic Environment and the Tuning of the World.

Björk’s interpretation of the musical features of the aforementioned songs as reflective of the solar system and planetary orbits are not merely aesthetic, but further reinforce her desire to symbolise the relationship between science and music. The ingenious synthesis of sound with audience interactivity, allowing the user to explore atomic and cosmic structures through the lens of her music, elevates the experience to one that transcends fields of study.

Despite hailing from a musical background, I have admittedly struggled to take pleasure in consuming the music from Biophilia, perhaps due to the highly calculated, serious and intelligent nature of Björk’s arrangements, leading the songs to be perceived more as art music than danceable listening. However, the visualisation of the songs in interactive form have allowed me to appreciate them differently, enabling me to understand Björk’s vision of integrating nature, music and technology. More than just an entertaining way to interact with the album, the Biophilia apps invite audiences to dive into the world of science, driven by music, to visually and aurally explore the relationships between different processes and structures. Perhaps this factor of learning, combined with the innovation of technology is why the Biophilia apps have even been integrated in Scandinavian education curriculums, particularly supporting children with ADD and dyslexia, according to Miriam Coleman’s report of the project in Rolling Stone.

The audience interactivity of Biophilia is the core quality that drives Björk’s vision of combining music, nature and technology, and the inherent nature of the iPad app helps to support this concept. The experience of the Biophilia app is reminiscent of Jay David Bolter and Richard Grusin’s analysis of remediation in both art and technology in their work Remediation: Understanding New Media. Each song can be visualised using multiple forms of a scrolling music score, enabling the user to follow along with the music, similar to a physical score. 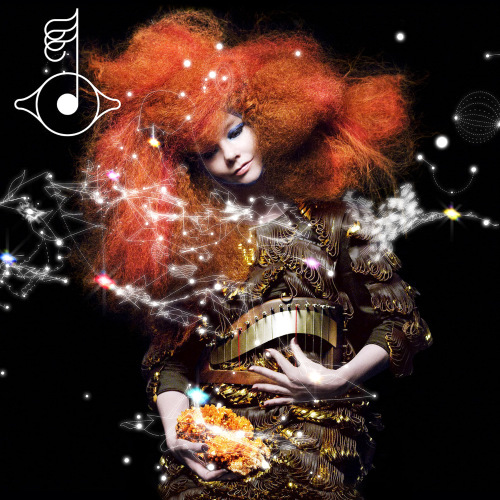 However, this medium is transformed on Biophilia, as the score is animated, interactive and also depicted in different formats, such as a non-traditional score made up of an abstract illustration of the music. Within songs such as “Crystalline” and “Sacrifice”, the music score is also transformed into an artistic participatory feature, allowing the user to interact with the music to create and execute new sounds. These mutations of the traditional music score can be seen as an example of translucent remediation, where Bolter and Grusin suggest that the “electronic version is offered as an improvement”.

Consequently, Alex Needham in a review for The Guardian, perceives that this form of remediation and interactivity within Biophilia potentially redefines the intimacy audiences had with music consumed through physical formats such as lyric booklets and compact discs, by bridging conventional and experimental representations of music. Additionally, developer Scott Snibbe in an interview for The Guardian, said his proposition for developing an album app is centred around the idea that an app can “demand all of your senses and attention at once”, an experience that has gradually become obsolete due to the digital consumption of music. In fact, it is rather ironic that Biophilia attempts to reclaim the attention of the background music listener by utilising the mobile device, the very technology that has influenced music’s casual consumption in recent years.

The role of digital technologies in play in Biophilia are more than just the programming of the mobile application. Created alongside a team of designers and engineers, each song’s app is intricately crafted to exploit the touchscreen technology of the iPad, with what Dibben states involve explicit consideration of the user experience such as the “cinematic language of swipes, cuts, and dissolves”. External technologies such as MIDI outputs are also considered, enabling the user to interact with the music on their own instruments beyond the mobile application.

This innovative use of interactive graphics, animations and visual imagery can be likened to Professor Lee Manovich’s analysis of the screen’s genealogy from a static “classical” screen to the interactive screen and its existence as a “space of representation” in his work The Language of New Media. Björk challenges the conventional visual consumption of music, from the classical screen of the album art to the dynamic screen of the music video, to the real-time screen of the live-streamed performance into the interactive multimedia experience of Biophilia, creating a seamless relationship between the audio, visual and participatory elements of music.

For an artist who constantly challenges the status quo, this exploitation of technology may have come at a cost for Björk, with many including Rao and Emami criticising the commercial and capitalist elitism associated with the iPad and Apple products in general. With a hefty price tag for the main app and each song combined, it can also be argued whether Björk’s vision for transforming music consumption and educating through music would be constrained due to its inaccessibility for many individuals who are unable to afford the project. Perhaps much has changed since the album and app’s release in 2011, with technology becoming more pervasive and digital disruption creating more egalitarian access to media, although at a price to creators. In fact, Biophilia has since influenced many of Björk’s contemporaries to follow in the path of the album app concept. Lady Gaga’s 2013 release of ARTPOP arrived with the grand vision of combining art, fashion and technology through an audiovisual experience.

While accessibility can be an issue, the app’s $500,000 budget highlights the extreme costs involved in creating a project as ambitious as Biophilia, and further reinforces Björk’s enduring vision to push the boundaries of art, music and technology. Ultimately, Biophilia has innovated the way audiences interact with music and technology, inviting participation into a medium that has recently become a form of passive consumption, heralding a new era where musicians can leverage the interactivity of personal technology.

Argus Fung is a recent Commerce and Arts graduate in Digital Cultures, Marketing and Business Information Systems at the University of Sydney.