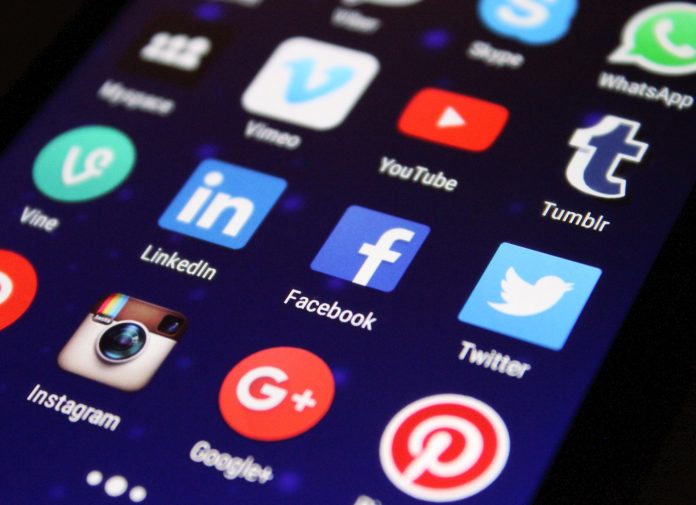 It’s a routine most millennials will recognise: wake up in the morning, pick up your cell-phone, and scroll through Twitter, Snapchat, Instagram, and Facebook to find out what’s been missed in the hours you’ve been sleeping. Occasionally you’ll find a new meme you don’t recognise – what’s this about Eminem being interviewed by the Secret Service? – and within seconds, you’ll be on Google to get all the information. In the age of digital technology and instant updates, meme culture has become an important way for millennials to stay up-to-date, and they’re doing it with big, goofy grins on their faces.

The word ‘meme’ dates back to the late 1970s when Richard Dawkins, renowned academic who was then an assistant professor at the University of California, Berkeley, related evolutionary principles to the way certain cultural ideas and phenomena are passed on. By 1982, we had our first mainstream meme: the sideways smiley “:)” created by computer scientist Scott E Fahlman.

There’s been much literature published about memes in their current sense in the last two decades. Texts range from academic analysis like Memes of Translation: The Spread of Ideas in Translation Theory by Andrew Chesterman who analyses the translation process of understanding memes, to novelty books like Ye Old Cat Memes: The Original Book of Cat Humorby Eulalie Osgood Grover who, as the name suggests, collects the best pre-Internet cat memes.

Linguists argue that memes are essentially cultural expressions passed from individuals or groups to others when we observe, consume, and adapt ideas. To be successful, memes must be original, digestible and easily understood. So even if we don’t know the day’s headlines quite yet, they should include enough visual information to evoke humour. When #ImpeachTheMF started trending in the US last month, a barrage of memes hit the Internet, and even if you weren’t sure of President Donald Trump’s alleged offense this time, you were bound to smile. 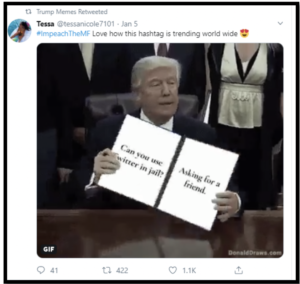 Due to their viral appeal, punchy content and participative nature, memes are now an essential part of the Internet experience. Although they appear uncomplicated, their use of ‘multi-modal grammar’, (images and captions) with a necessary sub-textual understanding, make them fairly sophisticated. The next time you’re laughing at a video of a dog dressed like the terrifying Chuckie doll, rest assured that you’re performing an intellectual exercise to have understood it in the first place.

Over the past two decades, a lack of citizens’ trust of governing bodies has made way for parody, and memes have fulfilled this function to become a form of public engagement. They’re a way for millennials to highlight events, criticise politicians or policies, and process their reality. The link between politics and memes is surprisingly straightforward – satire as a genre has always been rooted in political communication. Dating back to Roman poetry, satire has been traditionally used to criticise vices in individuals, institutions, or even society itself. It’s meant to evoke responses ranging from indignation and anger to comfort and amusement.

When Australia’s 2019 federal elections didn’t quite go as expected, Internet memes were the first to voice disappointment. 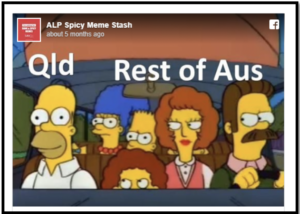 Similarly, satirical shows like The Late Show with Stephen Colbert, Last Week Tonight with John Oliver, and The Daily Show with Trevor Noah are major vehicles of political critique in the United States. In a study by the Pew Research Centre in 2004, 48 er cent of adults even reported they watched these shows for information on presidential hopefuls and their campaigns.

In October 2018, The Daily Show wasted no time in making fun of the newest Associate Justice of the United States Supreme Court, Brett Kavanaugh, after his nomination was confirmed (with vocal support from President Trump) despite multiple sexual assault allegations against him. 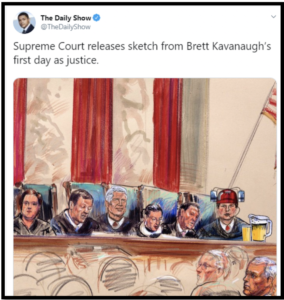 Three different women had come forward to reveal that he had sexually assaulted them in high school or university while in an intoxicated state. In the Senate Judiciary Committee hearing that was held, Kavanaugh  claimed multiple times that he enjoyed beer but said he had never been black-out drunk, or taken advantage of any women while under the influence of alcohol.

On the day of his confirmation, the satirical news show released an exaggerated cartoon of the judge wearing a beer helmet on his first day of work.

After the horrific Christchurch massacre earlier this year, Queensland Senator Fraser Anning’s Islamophobic comments inspired a teenage boy to crack an egg on the senator’s head during a TV interview. This gave rise to a new meme and Internet hero: Egg Boy. 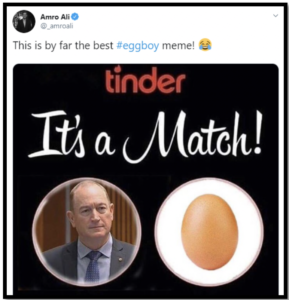 The memes were, of course, humorous but the message went further than that. Identified as 17-year-old Will Connolly, Egg Boy became the face of a millennial backlash against prejudice and bigotry.

Although he was arrested after the event, the teenager was released without charge. He received mass social media support and over $99,000 worldwide for legal aid, which he subsequently donated to the Christchurch Foundation and Victims Support.

From compilations of Kylie Jenner singing to her toddler to Area 51 memes planning to storm the American military base in search of aliens, you’ve got to wonder if millennials will laugh at anything.

But the ridiculousness of these endeavours serves a more serious purpose. When words or phrases are repeated enough times, they lose their value and meaning, and this has started to foil an age-old political tactic: repeat key terms or phrases to control what filters through the media to the public.

As outlined by many strategists, when politicians repeat carefully crafted key terms as talking points, there’s a greater chance of these terms making it through the media’s editing process, effectively helping politicians frame the story how they’d like. When memes and satire use wordplay and exaggeration, they show us how easily words can be manipulated.

During the Brexit impasse from 2017 to 2019, former British Prime Minister Theresa May noticeably repeated the phrase “strong and stable” in all her communications regarding the United Kingdom’s withdrawal from the European Union. The Internet picked up on this immediately and came up with their own nickname for the political leader, the tongue-in-cheek ‘Maybot’. The more she used the phrase, the more she was mocked. (Of course, her government’s inability to come up with a Brexit deal certainly didn’t help.)

In these technology-driven times where so much information is in circulation, memes are an easy choice because they’re simple. They get to the point in a way that distils a complicated news story into a single picture, video, or both.

However, while meme culture may appear to be all fun and games, they’re often criticised for creating ‘online echo chambers’, a phenomenon where individuals find themselves solely exposed to information from other like-minded individuals. In simpler terms, it’s believed that memes create a loop through which we only receive information in line with our beliefs. Primarily fuelled through online algorithms, this phenomenon effectively removes opposing arguments from our conversations and replaces nuanced debate. To understand a meme, you must understand its context, and this creates a division between those who “get it” and those who don’t.

During the 2016 United States elections, it was believed that platforms like 4Chan created the ‘4Chan vote’, a voting block of alt-right, conservative Internet trolls who inadvertently aided in Donald Trump’s win. Other websites known for an active alt-right meme community include 8Chan and Reddit. Often, these spill over onto mainstream platforms like Facebook and Twitter.

Additional criticism against political meme culture is that they’re rarely fact-checked. Because of the nature of memes, it’s hard to hold meme creators to account, and their work is often waved off as a harmless joke. This means that some memes that discuss white supremacy, neo-Nazi ideologies and other offensive material are hard to moderate.

In an age when posting a tweet takes less than a minute, it’s easy to blow things out of proportion. Take the case of Indian Finance Minister Nirmala Sitharaman who said last month that millennials’ preference for taxi-booking apps had created an economic slowdown. Within minutes of this announcement, #BoycottMillennials was trending on social media. With each tweet, the humorous accusations became more exaggerated. 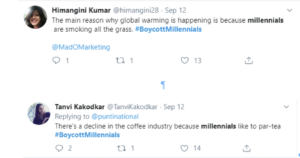 What Indian Twitter failed to note was the fact that the finance minister was quoting a global study. According to Deloitte’s 2019 Global Automotive Consumer Study, Indian consumers had replaced the desire to buy cars with shared mobility such as Uber and Ola, triggering an automotive crisis in the country.

Meme culture is by no means a new trend and it isn’t limited by geographical or cultural boundaries. Whether it’s the United States, United Kingdom, India or Australia, memes are a form of expression amongst the Internet-savvy. It’s easy to get swept up by the latest trend but while laughing at how you’d like to ‘crack open a cold one with the boys’, we should recall memes aren’t inherently good or bad. As a phenomenon, they speak to a cultural moment, taking on the character of the individuals who create them, and the individuals who consume them. A meme isn’t a meme if it isn’t shared with the public, reminding us that in the end, it’s up to us to make the most of it.

Rhea L Nath is a graduate student of Media Practice at the University of Sydney. Her work has previously featured in The Junction, Scroll.in, Hakara Journal, and Cogito – The Literary Journal, amongst others. She can be reached by email or @rnath96 on Twitter.