Before Matthew Thompson became the Green’s candidate for the Sydney electorate he was a scared queer youth living below the poverty line.

It was 2013 and election night. It was the first time he was able to enjoy his duty and right to vote and he was terrified as he watched the results come in to declare Tony Abbott the new prime minister of Australia. “I remember feeling completely powerless and helpless,” he said.

The next day Thompson was surprised to wake up with a strong urge to get involved in politics, so he attended a Greens party meeting. “If a man like him [Tony Abbott] can be prime minister — someone who I think is deeply incompetent and has cruel policies — why can’t I or someone else run for these things; why can’t we be part of this process too?”

He desperately wished to see someone represent him and his community: then he realised all he had to do was raise his hand.

“The reason we have this lack of trust and the reason we don’t trust career politicians is that they don’t represent us,” he said. “I wanted to see a proud queer person standing up for politics. I wanted to see us elevate young people to positions of leadership and then I realised that maybe I had to be the person to do that. I put my hand up.”

The Australian Parliament only has nine openly queer members of parliament. Thompson is the first openly queer MP candidate selected by the Greens for the electorate of Sydney.

As a member of the Greens, Thompson is a strong supporter of action on climate change but what matters to him most is helping the community survive on a daily basis.

For instance, he is a strong advocate for raising the Newstart allowance. Currently, Newstart offers a maximum fortnightly payment of $555.70 to a single person with no children. Auspay — the Newstart equivalent for students — provides a maximum fortnightly payment of $455.20. Neither of the major parties has committed to raising Newstart. Thompson wants to see Newstart increased at least $75 a week, to bring the total above the poverty line.

His desire to support and enrich communities comes from his TAFE studies where he specialised in community services. Along with the rest of the Greens party, he hopes to implement the Federal Housing Trust which would build 500,000 accessible, affordable and high-quality homes in different communities throughout Australia.

Frequently criticised for his choice of outfits and lifestyle, Thompson is trying to break the norms of what a typical politician looks like. He wants to show Australia that you can be a politician, go out with friends, wear biodegradable glitter at Mardi Gras, and change the conversation people are having about social housing and climate change. 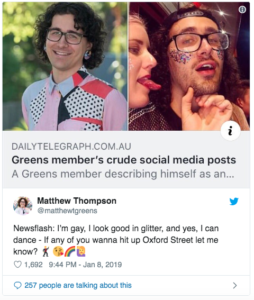 After being preselected Thompson found himself facing homophobic attacks. In an article The Daily Telegraph criticised Thompson’s Instagram entries judging he was “too gay to be in politics”.

“It’s very obvious that their issue with me running is that [they think] ‘he is an openly flamboyant young queer man having a go at politics’,” he said.

He was flooded with positive messages from the LGBTQI community.

Carl Suster, a PhD student at the University of Sydney, plans on voting for Thompson. As a member of the queer community, Suster is proud to see people from the LGBTQI community rise to positions of leadership.

“Matthew Thompson is proud of who he is. He represents the younger generation that wants to do better for the community while being authentic to himself,” Suster said.

These are exactly the messages Thompson hopes to embody during his run for the Sydney electorate.

“We know that Sydney has always been a safe Labor seat and it’s not about winning, it’s about changing the conversation,” he said. “I think we’ve done that already.”